OK
Select a maximum of 5
Save
Return to thread list

1. Hero Level
Increase a Hero’s level to boost your Hero’s ATK and the number of troops they command. 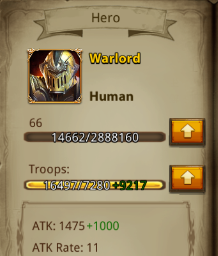 2. Hero Skills
Each Hero has a unique skill. Some skills strengthen the troops they command, while others allow Heroes to unleash devastating attacks. Different Hero teams will help you in different situations! 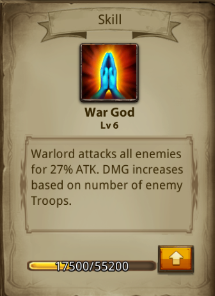 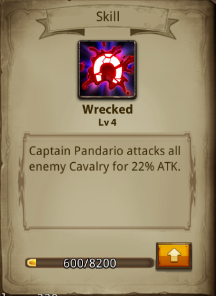 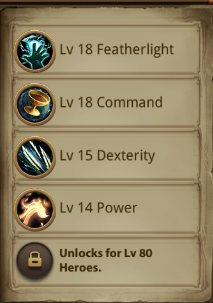 4. Talents
Hero Talents strengthen the troops they command. Each Hero has a different set of Talents. Upgrade their Talents to make them a force to be reckoned with! 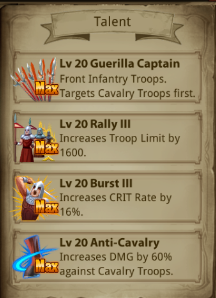 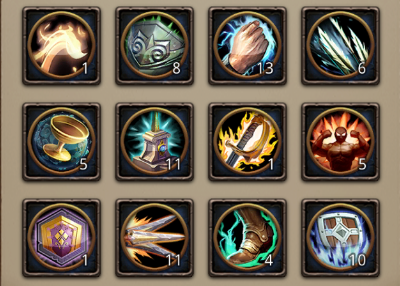 Once you gain a Crest, use it and you will be able to select a Hero to inlay it. You can also view the current Crests inlaid on a Hero, if they have any. 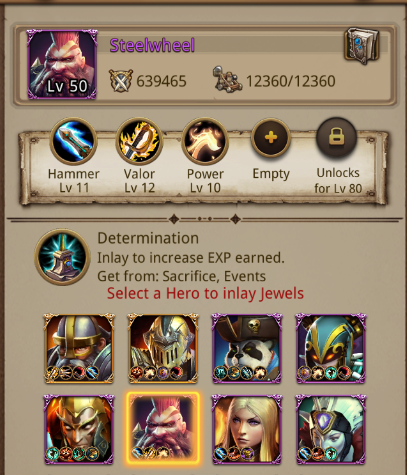 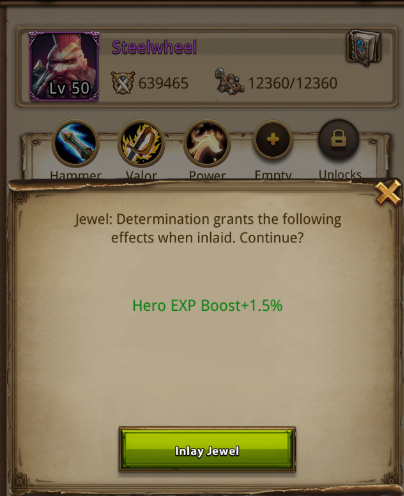 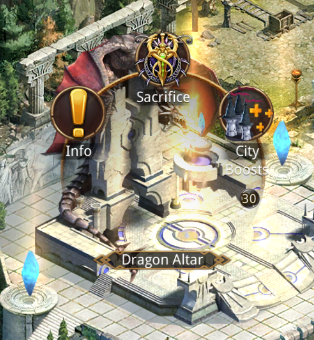 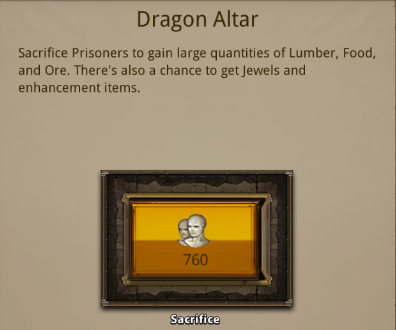 Sacrifice Prisoners at the Altar to win fantastic rewards! Prisoners are captured during Battles. Sacrifice rewards include Food, Lumber, Ore, Reinforcements, Boosters and if you’re lucky, Crests or Enhancers! There’s also a chance that a Sacrifice will grant you 5x the usual resources! 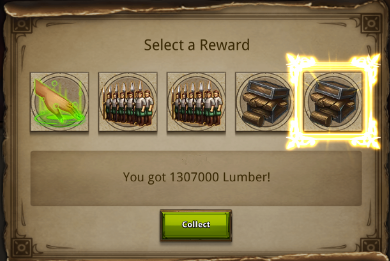 8. Guilds
Tap the Guild icon in the bottom right corner to enter the Guild interface. You can search for Guilds and join them. Some Guilds require the Guild Leader’s approval. Once your application is approved, you will officially be part of a Guild! You can also create a Guild by tapping on “Create Guild”. Enter a Guild name and notice, and pay a fee to create your own Guild!

9. Guild Wars
Tap on the [Guild War] button in the Guild UI to access Guild Wars. Coalition Attacks related to your Guild can be found here. This includes Skirmishes, Province Battles, Provinces and Guildmates being attacked. You can tap the [+] button to join a Coalition Attack.

10. Guild Tech and Donations
Tap on the [Research] button in the Guild UI to access Guild Tech. There are three categories under Guild Tech: Infrastructure, Economy, and Military. Guild members can donate resources to accelerate the Guild’s Tech upgrades.
Credits are required to carry out Guild Tech research. You can get Credits from occupied provinces. The Guild can also get Credits from donations. 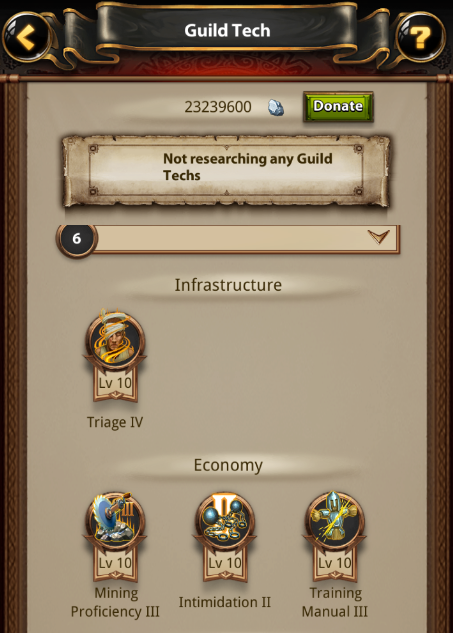 Tap on the [Donate] button on the top right corner. You can then choose to donate Food or Lumber to gain Honor and earn Guild Credits. Honor can be used to buy items in the Guild Mall. 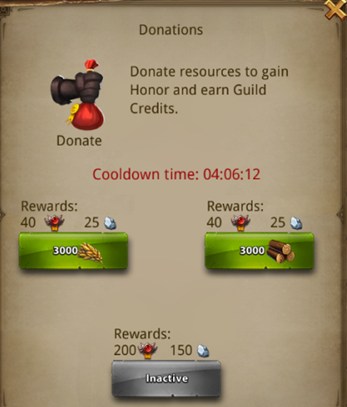 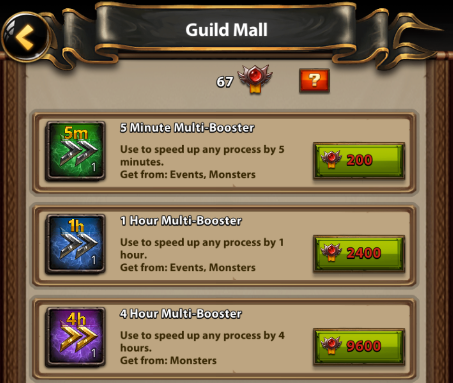 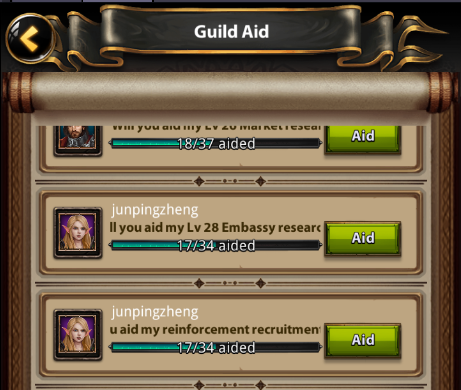 13. Guild Province
After creating a Guild, the Guild Leader or Deputy may form a Coalition Army for Province Battle. All Guild members may join the Coalition. 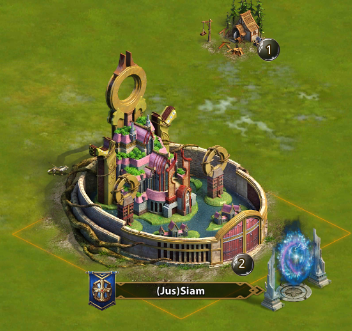 If a Guild occupies a Province successfully, the Province will appear under [Guild Province]. 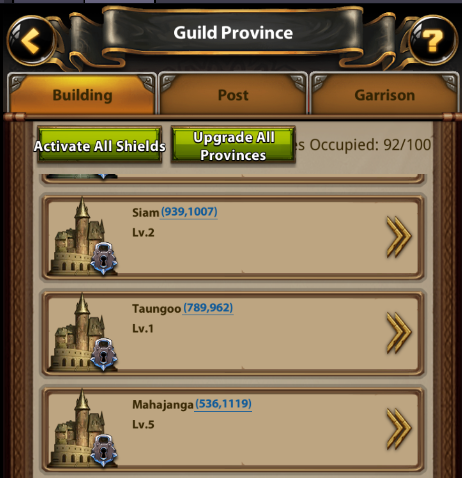 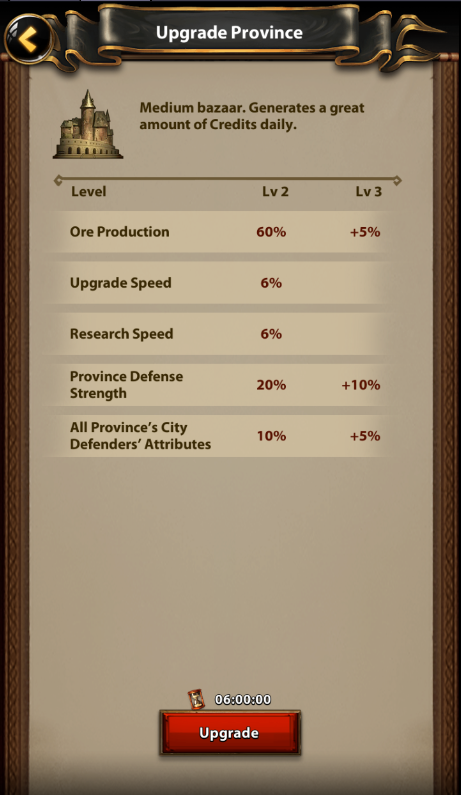 18. Migration Guide
Select a World on the Overworld map and tap any location to bring up a menu, then select “Migrate” to migrate your City. You’ll require a Passport each time you migrate. You can get a free Passport by upgrading your Dragon Altar to Lv. 4. Passports can also be bought at the Mall.
Migration has a few limitations:
1) The migrating player’s Might cannot exceed the 50th-ranked player in the new World.
2) Migration function is unavailable during World Invasion.
3) A Guild Leader must transfer leadership to another Guild member before migrating.
4) Migration is only available when no units are deployed.
5) Player may only carry 3,000,000 Food, 3,000,000 Lumber and 250,000 Ore to another World. Resources exceeding this limit will be removed after migration.

There are two ways to migrate to another World:
Method one:

2) On the Regional Map, tap the Overworld Map Icon 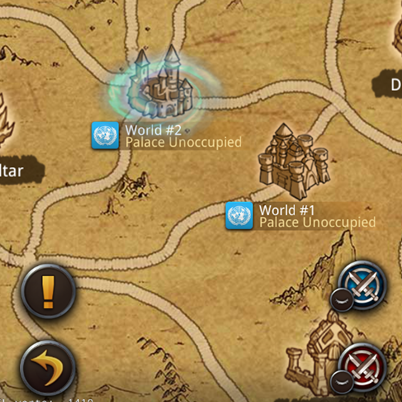 4) Tap any location on the map to bring up a menu, then tap Migrate.

1) Tap the Search Coordinates icon to bring up a menu

2) Enter the World you wish to migrate to, then tap Search. 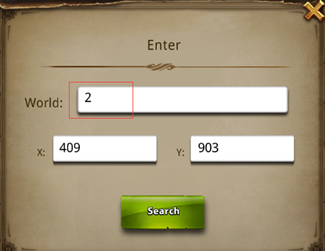 3) Tap any location on the map to bring up a menu, then tap Migrate.

How can i get warlord..

To obtain gold or orange level heroes, you must obtain shards from in game events or purchase the packs offered by IGG. To obtain purple, blue, or green level heroes, you can go to the tavern or by attacking certain level monsters. If you need further assistance, please feel free to contact me.

Demonfire24 Rated on 2016-07-16 17:44:11
Warlord is obtained through events by obtaining shards. Heroes are not given out free as players have to earn them.

Great guide. Looking forward to more from you.

Signature
" A good commander never gives up a defensive advantage."

Well explained this should help lots of new people in the game nice job!

i need more info about hero.. like . what hero can i use to kill  demon hunter?

KingJake76 Rated on 2017-01-01 14:33:59
You can use a Google play card they are found mostly in a Walmart, Dollar general, and sometimes a Tom thumb store other places I do not know for sure.